Investors have their noses to the wind for the source of the next crisis. The terrifyingly titled pile of debt, known as “leveraged loans”, could be starting to pong. At Harbour we remain vigilant, monitoring the US market, but taking comfort in the structure of markets down under.

Leveraged loans are simply private market borrowing by sub-investment grade companies[1]. The US leveraged loan marketplace provides well over $US1 trillion in funding for companies involved in private equity buy-outs, gearing their balance sheets or funding expansion. Banks provide around half of this funding with the remaining share going to institutional investors, hedge funds, insurance companies and non-bank finance companies[2]. Banks underpin support for a sizeable European market also; the New Zealand market is tiny in comparison. But we do have leveraged loans. For example, the debt funding used by a private equity firm to buy TradeMe is considered a leveraged loan. 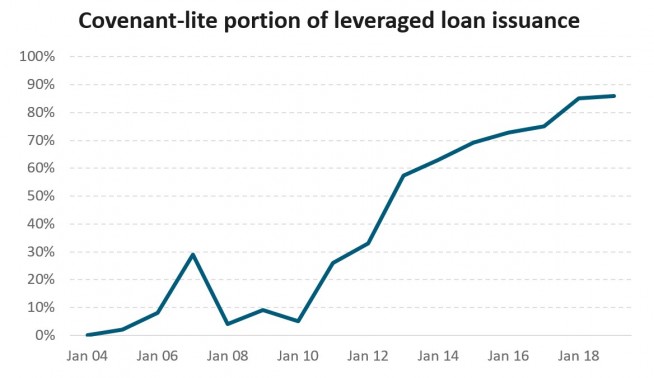 The makings of a credit cycle

Poor quality loans are more likely to experience losses when corporate profitability dips. If losses are material enough, this can reduce banks’ broader appetite to lend as they recapitalise, thus impacting the real economy. 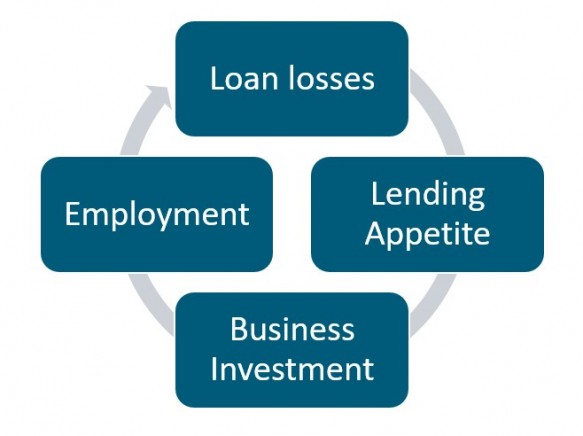 There are reasons for optimism that the leveraged loan sector would not cause a banking crisis. We examine these along with our more balanced view: 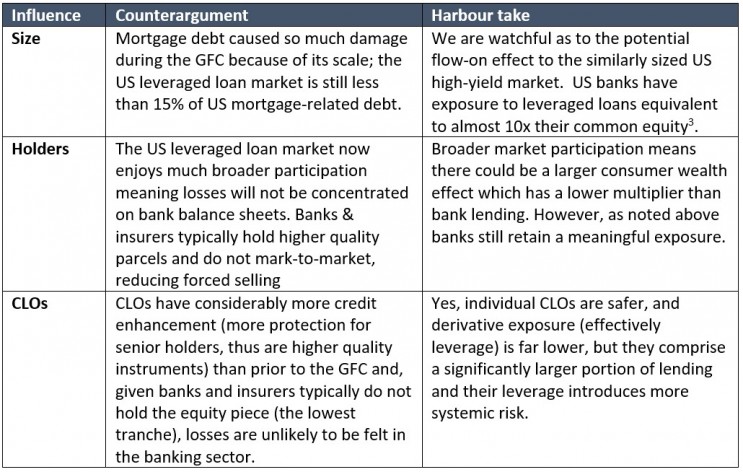 The leveraged loan sector can be de-risked if US corporate profitability growth remains strong while the standards of new loans improves. We saw encouraging, but tentative, signs of this in Q4 2019.  Loan losses remain below long-term averages.  For now, we watch corporate profitability as a lead indicator for loan quality as well as continuing to monitor loan growth and underwriting standards.

The Harbour Income Fund has funded sub-investment grade borrowers via the Australasian high yield market.  The lack of issuance of bank capital securities has provided borrowers a favourable environment in New Zealand. Harbour has had limited participation in the few deals that have been issued in this market owing to issuer-friendly pricing (low yields) and generally weak investor protections.  Meanwhile, not only have we found spreads more rewarding in Australia, but covenants have also offered investors more protection.  For example, Australian payment technology firm Afterpay is not allowed to make any distributions to shareholders while our bonds remain outstanding. In another example, the bond documentation of Australian data centre owner-operator, NextDC, permits it to pay dividends only when net debt / EBITDA remains below 1.5x. Many of the recent New Zealand high-yield deals included no protection.

Impact Of Viruses On The Economy

Each coronavirus tends to have different characteristics, and this latest coronavirus, Novel Coronavirus or 2019-nCoV, is no different. The data so far shows that 2019-nCoV is far more contagious than SARS or MERS, but fortunately is less deadly with a mortality rate of 2%, much lower than SARS (9.6%) and MERS (~35%). So far, the fatalities have been most prevalent among older males with existing respiratory issues such as emphysema.

According to the latest WHO report (February 3, 2020), there are 20,571 confirmed cases of 2019-nCoV, which has claimed the lives of 426 people (425 in China, 1 in the Philippines) so far. Somewhat critically, up until this point the number of new reported cases has continued to accelerate. As well as the severe human toll, there will of course be an economic impact resulting from reduced consumer confidence and activity, disruptions to supply chains and complications to logistics. 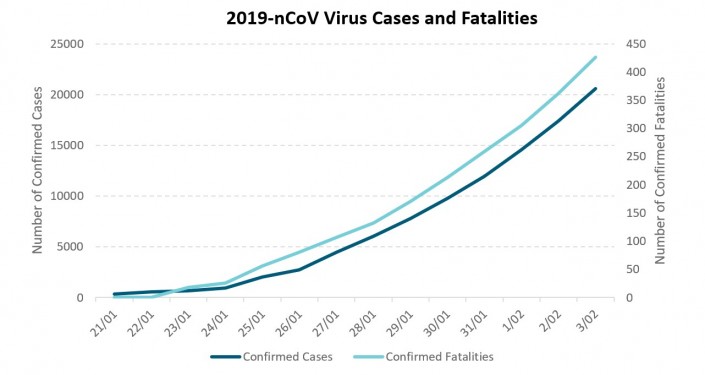 It is far too early to accurately estimate the economic impact of 2019-nCov. While past epidemics, such as the SARS outbreak in 2002/03, can offer some insight into the possible economic impact, direct comparisons will prove to be inexact. China’s share of global output today is over double what it was at the onset of SARS, and China’s share of global trade is around 2.5 times what it was in 2002. Consumption and services, areas likely to be most negatively impacted, are now a much larger share of China’s economy.

Another key factor around the economic impact is the swift steps taken by China to contain the virus. While widely criticised for the slow reaction to contain SARS, China’s response to contain 2019-nCov has been faster and more extensive this time. An outcome of this is that the reaction, which will save many human lives, will likely result in a larger short term hit to activity than SARS did. Chinese authorities, cognisant of this, have already announced a raft of stimulus measures to cushion the economic blow from 2019-nCoV. These include injecting liquidity, cutting central bank repurchase rates, lowering lending rates and fees for companies and regions most affected by the outbreak and encouraging banks to not call in loans to affected firms. Despite this, it is likely that we will see GDP growth expectations cut for the first half of 2020 and, globally, monetary policy will remain accommodative.

We have already seen sharp market movements as this situation has unfolded. China, commodity and tourism exposed stocks have been hit the hardest. Some healthcare stocks have benefitted from expected higher healthcare spending. Chinese A-shares, which resumed trading after an extended Chinese New Year break, closed down -7.9% on the first day of trading; albeit they continued to recover somewhat as new stimulus policy measures were announced.

Bond markets have benefitted from a flight to quality. Since confirmation of Novel Coronavirus on January 7th, the 10-year US Treasury yield has fallen 35 basis points (bp) to 1.52%, close to the September 2019 low of 1.42%. Expectations of rate cuts from the US Federal Reserve have doubled, from one rate cut over the next 12 months, to two. In New Zealand, our 10-year government bond yield has fallen 23bp to 1.23% over this time, and expectations of our Reserve Bank easing over the next 12 months has increased from 14bp to 22bp of cuts.

Global commodity prices have fallen more than 10% in response to the Coronavirus outbreak. The Commodity Research Bureau’s (CRB) Index is currently around its lowest levels since early 2016. Oil prices have dropped more than 20% since early January, with Dubai crude oil (the most relevant benchmark for New Zealand) currently USD55 per barrel. Milk futures provide a real-time gauge of the impact on New Zealand commodity prices, and they have fallen 3% since the Coronavirus outbreak.

In terms of the market impact, as opposed to economic impact, we believe history is a potential guide. In previous epidemics, markets only recovered after the number of new cases peaked. We recently heard from a coronavirus expert, who believes it may not be until mid- February, at the earliest, that this occurs.

Below we look at the impact SARS had on markets in 2003.

How we are positioned

We do not profess to know more about 2019-nCov than anyone else. We have tapped our global research partners and contacts to learn more about the virus from experts, and have attempted to understand what the past can, and cannot, teach us.

Having a long-term investment focus, which aims to identify companies that will benefit from structural change, means that, at the margin, we have added to some stocks with structural tailwinds which have been sold off as a result of the event. But otherwise, we are taking a vigilant and patient stance.

Within fixed income, portfolios were structured for rising interest rates as forward-looking economic indicators and government spending plans are supportive for future growth. Following the disease outbreak, we have reduced this position, purchasing assets that will perform well if the Reserve Bank lowers the Official Cash Rate (OCR).

It would also be remiss to not mention that, prior to the outbreak of this unfortunate virus, we were seeing increasing evidence of a U-shaped rebound in global activity. Chinese activity indicators were improving, which was helping the European manufacturing sector to show signs of bottoming. The latest read of US Manufacturing PMI, released February 3rd, also showed a rebound in activity. So, while undoubtedly growth will be revised down for H1 2020, the silver lining may be that it did not hit during the period of economic weakness we saw in mid-2019.